Religious Symbols
Inside & Outside the U.S. Supreme Court Building

Emblem on the Oak Doors into the Court Chamber

The doors of the Supreme Court chamber don't literally have "the Ten Commandments engraved on each lower portion."  The depictions are two engraved tablets bearing the Roman numerals and   These symbols can represent something other than the Ten Commandments (such as the ten Bill of Rights).

Some critics contend that anything that is cannot possibly be interpreted as representing part of the because that document was not written on tablets.  One could use that same argument to contend that anything bearing the common version of Roman numerals cannot possibly represent the Ten Commandments, because that numbering system was not yet in use at the time of the events described in Exodus (snopes.com).


Wall Friezes inside the Courtroom —

The East Wall Frieze above the Supreme Court Bench

The architect of the Supreme Court Building, Cass Gilbert selected Adolph A. Weinman a noted sculptor, to design the marble friezes for the upper walls of the Courtroom.  Architect Cass Gilbert is best known as the architect for the Woolworth Building in New York City.

According to the Gilberts vision of the building, he relied on Weinman to choose the subjects and figures that best reflected the function of the Supreme Court Building.  In this case, Weinman designed friezes portraying both allegorical representations of law, on the east and west walls, and historical lawgivers, on the north and south walls.  Thus, Weinmans choice of symbols and figures were his own and reflected his training in the neoclassical and Beaux Arts traditions.  Weinman drew from many civilizations and was faithful to classical sources. 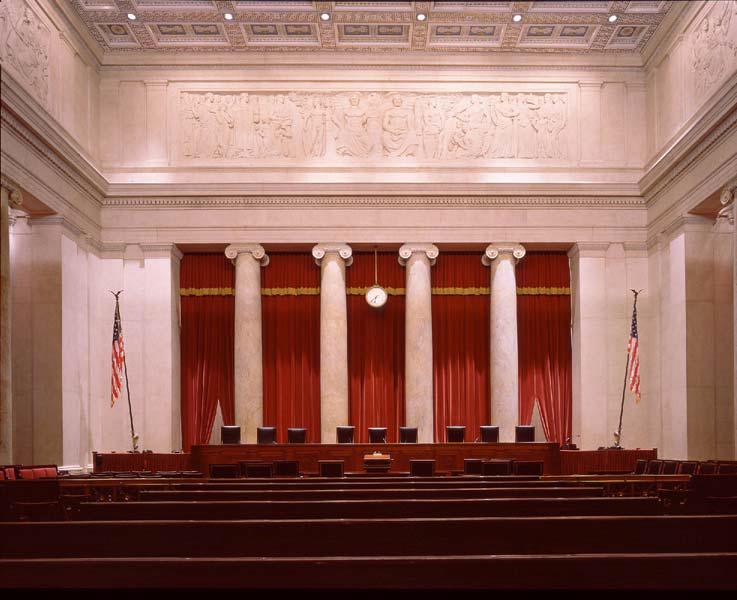 The Courtroom showing the location of the East Wall Frieze above the Bench (c. 1998)

Sculptor Weinman designed these friezes to portray allegorical representations of law for the east and west walls.

The East Wall Frieze (above) is located directly above the Bench.  At the center are two male figures: on the left is the Majesty of Law with a book of law at his side;  to the right is the Power of Government who holds the fasces, an ancient Roman symbol of authority.  According to a letter from Weinman to Gilbert describing the design for this frieze, the pylon carved with the Roman numerals I to X between the two central figures symbolizes the first ten amendments to the Constitution, also known as the Bill of Rights.  Behind the central group, an American eagle spreads its wings.

Immediately to either side of the central figures are Wisdom, on the left, mostly nude and holding a lantern, and Statecraft, on the right, whose shield is emblazoned with the Scales of Justice.

Weinman described the figural group to the left, led by a judge holding a book of law, as the The Defense of Human Rights and Protection of Innocence.  He called the group to right the Safeguard of the Liberties and Rights of the People in Their Pursuit of Happiness.

Adolph A. Weinmans sculptures for the south and north walls depict great lawgivers. The facing friezes begin on the South Wall, to the right of visitors, with an allegorical figure for Fame.  This procession of historical lawgivers of the era moves from left to right.  The writing on the visible tablet carried by Moses in this frieze includes portions of commandments (in Hebrew), specifically chosen because they are not inherently religious.  Commandments proscribe murder, adultery, theft, perjury, and covetousness (snopes.com).  Included among the great lawgivers are additional allegorical figures.

According to Weinman, the West Wall Frieze is an allegorical representation of Good Versus Evil.

In this sculpture, the central female figures are Justice and Divine Inspiration.  Leaning on a sheathed sword representing her might, Justice faces to the viewers right, staring down the forces of Evil.  The winged figure of Divine Inspiration holds out the Scales of Justice.

Flanking these two figures are representations of Wisdom, to the left, with an owl perched on his shoulder, and Truth, to the right, holding a mirror and a rose.

Moving to the left from the central figures are the Powers of Good: Defense of Virtue, Charity, Peace, Harmony, and Security.

The Powers of Evil, moving to the right from the central group, are: Vice and Crime, Corruption, Slander, Deception, and Despotic Power.

The frieze on the North Wall, to the left of visitors, is a procession of historical lawyers of the Christian era.  This procession moves from right to left with allegorical figures interspersed.

Sources: retrieved from www.supremecourt.gov/about/east&westwalls.pdf June 23, 2013,
and retrieved from www.supremecourt.gov/about/north&southwalls.pdf June 23, 2013.
All these photographs are from the Collection of the Supreme Court of the United States unless otherwise noted.
My descriptions are based on texts from the Office of the Curator • Supreme Court of the United States - updated: 10/1/2010 (East & West Walls) and 5/8/2003 (North & South Walls).

- Viewing the Outside of the Supreme Court Building -

Views of the building's main entrance on the west side, facing the United States Capitol. "Equal Justice Under Law" is incised on the architrave above the sixteen marble columns. Above this is the pediment, filled with a sculpture group by Robert Ingersoll Aitken Figures (not visible) represent "Liberty Enthroned" guarded by "Order and Authority," and on either side are groups of three figures depicting "Council and Research."

The Supreme Court Building from the East

Office of the Curator • Supreme Court of the United States
The U.S. Supreme Court Building from the east: "Justice - The Guardian of Liberty"

The building's eastern pediment by Hermon A. MacNeil

Cass Gilbert, the buildings architect, worked closely with MacNeil from 1932 to 1934 to create the thirteen symmetrically balanced figures above the Corinthian portico.  The central marble figures on this rarely noticed eastern pediment depict the theme The Guardian of Liberty."  Sculptor MacNeil's central figures represent three great Eastern civilizations from which our laws are derived.  These figures portray lawgivers: Moses (receiver of Hebrew Ten Commandments) flanked by Confucius (Chinese philosopher and teacher) and Solon (Athenian lawmaker, statesman, and poet).  Confucius is on the viewers' left, Solon to the right, both flanking Moses with his hands on two separate tablets.

The two tablets that Moses holds in his arms are blank, without inscription.

Allegorical figures on each side of the lawgivers represent functions of the Supreme Court.  Sculptor MacNeil submitted the following description of his work to the Supreme Court Building Commission:

Law as an element of civilization was normally and naturally derived or inherited in this country from former civilizations.  The "Eastern Pediment" of the Supreme Court Building suggests therefore the treatment of such fundamental laws and precepts as are derived from the East.

The next two figures with shields:

The two lawgivers, Confucius and Solon, are not facing Moses in the middle.  All three lawgivers are depicted facing forward in full frontal views.  However, the allegorical figures who flank the three lawgivers are indeed facing towards the middle, but they are looking in the direction of all three men, not just toward Moses.

The Fable of the Tortoise and the Hare

At the corners of the East Pediment of the U.S. Supreme Court Building, Hermon MacNeil placed the figures of a tortoise and a hare as "bookends."  These two marble carvings, the smallest pair of groupings in his work The Guardian of Liberty, are nearly hidden.  The Brooklyn Daily Star (his local newspaper) suggests that the tortoise is illustrative of the tortuous mazes of the law."

In addition to the . . . figures of the great sculptor [MacNeil] is completing the decoration with symbolical figures and design.

In this connection, the design will include the figures of the tortoise and the hare.  Whether the august Justices of the Supreme Court will fancy the allusion to the law as a solemn, plodding tortoise, cannot be known.  But, it must be remembered, the tortoise did reach the goal eventually. (February 27, 1933)

Friezes inside the Courtroom - reduced size